For those of us who are surfers and enjoy frolicking in one of nature’s most epic playgrounds, the ocean and its waves are both incredibly fascinating and extremely important. Yet for anyone who is a prospective surfer, ocean/nature lover, or curious individual, you may wonder: what are ocean waves, and how exactly do they form?

In this blog, we aim to explain a little more about what ocean waves are, how they form, and the different types of waves, all from the perspective of a current or future surfer. Finally, we will explain a little about the waves here in our area — Costa Ballena, Costa Rica — and what makes it such an ideal place to learn how to surf.

How ocean waves are formed

Ocean waves have long been a source of intrigue, myth, and wonder. From the Greek mythologies of Benthesikyme and Cymopoleia the goddess of waves, to the Polynesian legend of Tangaroa, god of the seas, people have felt the power of a wave and attributed it to supernatural causes. The truth is much more scientific, but just as fascinating.

Waves are formed by energy that has traveled through the water in a circular motion.

According to the National Oceanic and Atmospheric Association (NOAA) when there is a storm over the middle of the ocean, winds push against the surface of the water “creating a disturbance that steadily builds as wind continues to blow and the wave crest rises.” And if we remember Newton’s Laws, energy cannot be created or destroyed, so the energy of the wave travels hundreds to thousands of miles until it reaches a coast.

The waves that we see crashing on the shore — the ones that surfers around the world chase — are the result of this circular energy movement being disturbed by the ocean floor. As the bottom portion of the energy rotation hits the ocean floor, it slows down which forces the water up into a steeper shape until eventually the wave reaches its breaking point. Which is when we catch it and ride it — allowing all that beautiful energy to flow through the surfer. The anatomy of an ocean wave

One of the biggest skills you learn by surfing is being able to read the waves. When learning how to surf and sitting in the “lineup” (out past the breaking waves), you are constantly keeping your eye on the horizon and trying to anticipate where you should be to catch that next great wave. One of the ways you can do this is to learn about the anatomy of a wave.

Here is a great graphic created by the San Diego Surf School that explains every part of a breaking, surfable wave from the peak to the trough.

Beginner surfers usually learn in the “shallow end” and on whitewater waves (that have already broken) to practice their pop-up and get comfortable with their equipment. More advanced surfers will paddle out to the “green waves” (the ones that are unbroken) and try to catch them right before they break. This allows the surfer a longer ride on the “face” of the wave with the highest velocity. When the conditions are right on certain waves, the most advanced surfers are able to position themselves in the barrel or the tube and ride within the tunnel of water that forms. “Getting barreled” is an incredibly sought-after experience for any surfer.

As you learn to surf, knowing the different parts of the wave allows you to anticipate where to paddle out to catch it in the right position and how exactly you want to ride it. Ideally, a surfer is able to read where the peak will form and then they will angle themselves to catch the wave on a slight diagonal either right or left (depending on how the wave is breaking) so that they maintain their position on the face. This is a somewhat intuitive experience, but having the background knowledge helps to understand the why.

The three types of wave breaks: beach, reef, and point

Now, as some of you may have guessed, not all waves are created equal. In general, there are three different types of waves and we distinguish them based on the obstruction on the ocean floor that causes the wave to break.

The largest registered wave in the world is located off the coast of Nazare, Portugal, and is a beach break. So is our lovely hometown break in Uvita, Costa Rica where we surf at Bodhi Surf + Yoga. Two very different waves but created from the same physics.

One more dangerous type of beach break is a “shorebreak”, when a wave breaks directly onto shore. This happens often when the bottom of the seafloor transitions quickly from deep to shallow.

A reef break is — you guessed it! — is a wave that breaks over a coral reef (or any other fixed object on the bottom of the sea floor like rocks). Waves that crash over reef or rock are almost machine-like. Because the seafloor is fixed, the waves crash in almost the exact same way over and over. The changing tides and and the direction of the swell are the changing factors of a reef break. Reef breaks are also notoriously more dangerous in the surfing world. The waves crash over a rocky and sharp bottom and usually the water is quite shallow. If you are planning on surfing at a reef break, be sure you know the safety precautions and always talk to the locals first!

One of the most famous waves in the world is a reef break: Teahupo’o. Teahupo’o (properly pronounced “tay-hoo-poh-oh” but often referred to as “cho-poo”) is off the coast of Tahiti and forms huge, beautiful tubes that advanced surfers from around the world flock to.

A point break is a wave that breaks from a point and then usually into some kind of bay or beach break. This can be a point where the shoreline juts or extends out into the sea, or it can be an underwater rock or reef formation as well. Point breaks can create very long, reliable waves that always peel in the same direction off the point. They are very steady in that they break in the same place and the conditions that create a point break do not change very much. Point breaks also create some of the longest rides in surfing but since they usually only have one take off point and travel in one direction, you may have to get in line and wait your turn to catch a wave. So, when you are out in the lineup and you see a wave coming towards you, there are a few different things to be aware of. Reading waves takes both patience and practice. No two waves are the same, no matter how well you may know the area and it’s tendencies. But, according to oceanography studies there are generally three types of breaking waves: surging, spilling, and plunging. Some of the waves near Bodhi Surf + Yoga in Uvita, Costa Rica

At Bodhi Surf + Yoga, we are incredibly fortunate where we live to have consistent, year-round waves that we can take advantage of for all of our surfing needs!

We do the vast majority of our surf lessons in the Marino Ballena National Park at what we call Playa Colonia or Playa Chaman. This is a beach break that has a sandy and very gradually-inclining seafloor, which, for the most part, makes for soft and slow breaking waves. Even if the waves are very large (too large to paddle out into the lineup), we can always take advantage of the whitewater waves or the waves that reform (turn from whitewater back into smaller, unbroken “green” waves as they continue traveling to shore).

In addition to that, we sometimes take our guests to Playa Hermosa, another beach break just north of us (and the Whale Tail). This beach break has waves that break a bit faster and more tubular than in the park, but this can be good for our bodysurfing needs or if the waves are incredibly small and the guests are a bit more advanced.

Nearby, we also have a surf spot called Dominicalito, which we sometimes take our guests to if the swell is very large and they are ready to paddle out into the lineup. This is a combination of a reef and beach break. It is appropriate because it is located within a small bay which is more protected from the larger swells that sometimes do hit our coastline.

We feel lucky to have a variety of surf spots within a 15-minute drive that are appropriate for our guests, who generally visit us as beginners or intermediate surfers. From the perspective of a surfer, they do not call it the “rich coast” for no reason!

We hope you enjoyed this explanation of waves, and that you find yourself frolicking in them sometime soon! 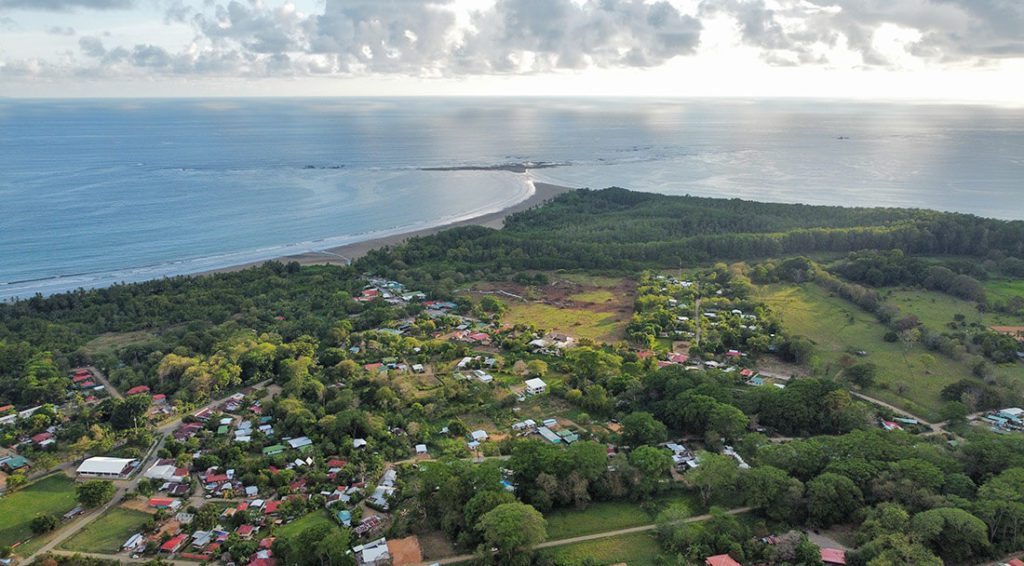 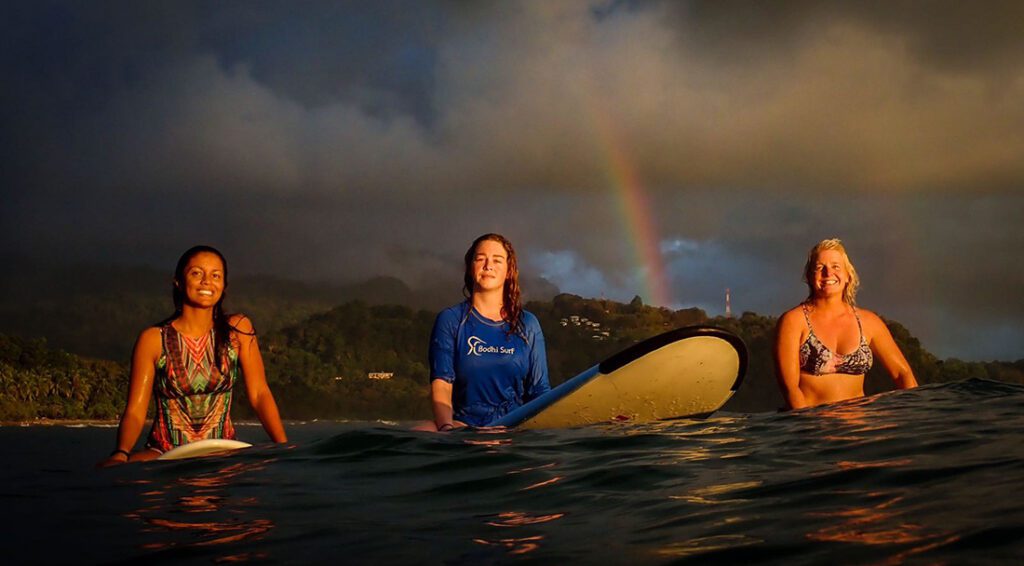 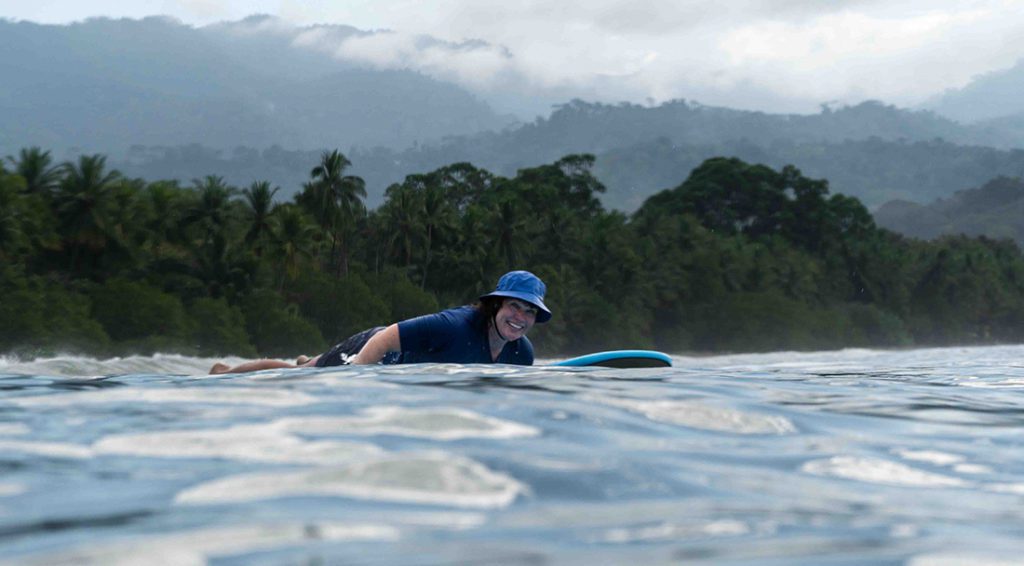