The history of Uvita is muddled and getting a concise version is nearly impossible. By visiting several community members you can get anywhere from five to ten different versions. John Maranon highlights this confusing history of Uvita in the book, “The Gringos Hawk”, as he writes about land possession in Morita (present-day Uvita):

“…Then, newcomers would purchase it from squatters, who appropriated it from the government, which took it away from Alcoa Aluminum after Alcoa purchased it from the ex-hacienda owner, who inherited it from his father, who acquired it from an unsuccessful banana company and poor subsistence farmers, who purchased it for pennies an acre from the original squatters, who, a mere 40 years ago, colonized the area after the indigenous people retreated to more remote mountain areas.”

What Is The History of Uvita?

Apparently around 1957, Fernando Cruz arrived to Punta Uvita. He was a young man, accompanied by his wife Leonor and son, Carlos Fernando, more commonly known as “Cai Cruz”. It is said their family settled near the entrance to Punta Uvita, near the famous bar “La Pachanga”, which to this day still exists though it’s crumbling away in decay. Rumor has it that the
family started buying properties and thus acquired a large amount of land, which was estimated to be a little less than 900 hectares. It was enough to create a large hacienda and cattle farm called Hacienda Bahia as well as an airplane business. Around 1962, family members passed away and Hacienda Bahia was inherited by and under the control of Cai Cruz. Some say that Cai did not have the knowledge and skills to control his family’s assets and things weren’t going so smooth. Some time later, during a flight from Uvita to San Jose there was an accident, and Cai Cruz lost his life. Afterwards, the Costa Rican national banks took control of Hacienda Bahia.

Soon after, during the 1960s and 70s, ALCOA, the world’s current leading producer and manager of primary aluminum, was attempting to excavate bauxite from the local mountains. The plan, so it goes, was for ALCOA to use Uvita – Hacienda Bahia, which they subsequently had purchased, as an export center, developing a road between Uvita and San Isidro General de Perez Zeledon and a small port at Punta Uvita for the exportation via ocean of bauxite and other products. ALCOA’s plans were very much viewed as anti-patriotic and Costa Ricans took to the streets to strike against the projects. In April 24, 1970, students and ecologist raged in what some historians have celebrated as the largest organized Costa Rican strike. This organized opposition led to the cease of all ALCOA projects and their departure from Uvita and Costa Rica forever.

Later, during the 1980s the Costa Rican government was the “owner” of Uvita. However, as time passed, Uvita became occupied by approximately 90 families, the majority of them coming from the Aguirre county, from Playa Matapalo to Quepos. Overtime, the families appropriated the land from the government through the Institute of Agricultural Development. Throughout the 1980s and 90s Uvita land was parceled off, given away, sold, and transferred. This cycle was continuously repeated throughout the 90s and became more common starting in the year 2000 with the appearance of foreign investors and real estate companies.

Uvita, with more than 1000 inhabitants, and a student population of more than 500, has become an eco-tourist destination. The area is home to the Marino Ballena National Park, coastal mountains, and beautiful beaches. Still in abundance are diverse flora and fauna and great people. We hope the Uvita of the future is filled with people that are of the mindset to live in peace with their neighbors, whether that be a plant, animal, or human.

*This is a very general and brief outline converging common elements found from different versions of the history of Uvita. By no means, does this article attempt to give readers a full documented history of Uvita.

Travis is a head surf instructor and social entrepreneur at Bodhi Surf + Yoga. When Travis is not at the beach getting guests stoked on surfing, he is probably at a community meeting, or spending time with his lovely daughters, Maya and Clea!
Travis | Last Updated April 26, 2022 | Bahia Ballena • Costa Rica • Uvita 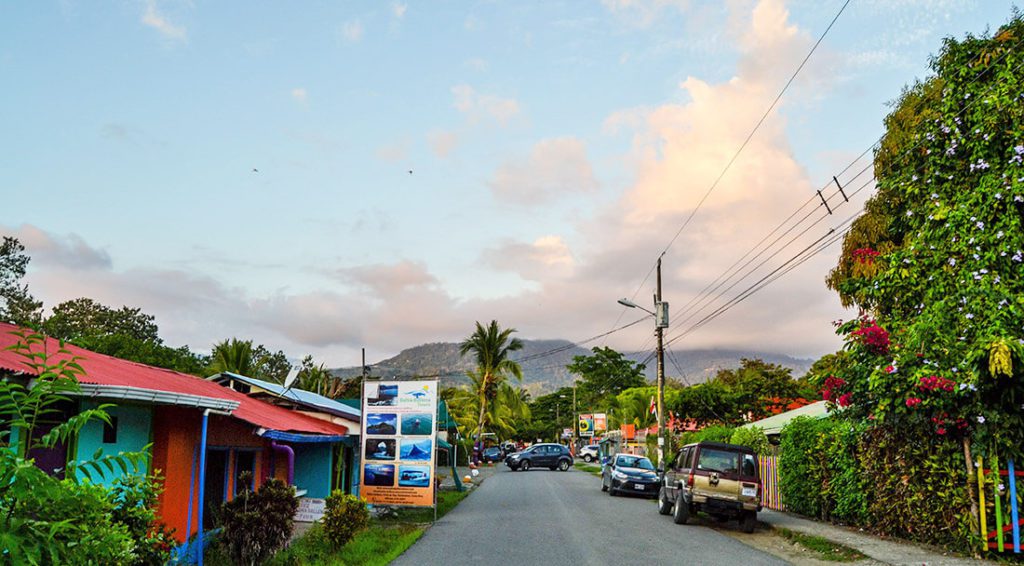 The Best Places to Eat in Uvita, Costa Rica