The Untold History of Surfing

There is a common narrative which tells the true history of surfing, but it doesn’t tell the whole story. When we paint the complete picture, the entire surfing community benefits by getting a greater perspective on surfing’s cultural, spiritual, and historical roots.

While part of this great surf story does take place in Hawaii, it’s not the only setting for this tale.

Without further ado, let’s dive into both the told and untold stories of surfing, and look at some of those lesser known characters and forgotten chapters. There is a common “standard” story of surfing, promoted by popular surf culture, movies, and social media, which depicts surfing in either one of two categories:

Through targeted ad campaigns by big brands, this activity is commonly portrayed as some fashionable lifestyle ideal, depicting a proper way to dress, look, act, and train.

Over the years, movies have also served this story by casting surfing’s main characters as rich white kids with nothing better to do than lounge at the beach all day getting a tan.

For example, if you were asked to close your eyes and imagine a “stereotypical surfer,” many would conjure up a similar image, probably a white, young, male with blonde sun-kissed hair and a puka shell necklace.

Many folks are familiar with the story of surfing’s development going something like this:

It’s important to mention that at this time African-Americans were excluded from swim culture in the U.S., including public pools, beaches, and surf spots, which were all segregated. 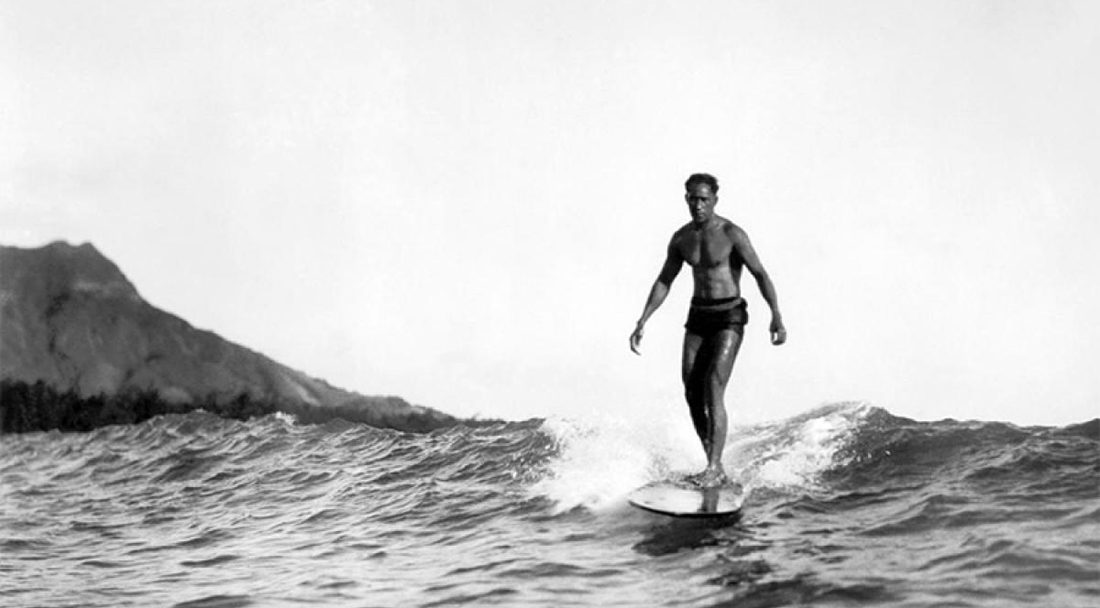 Surfing in the 20th century was branded as a “royal sport” and the “sport of kings” as it was seen as intricately linked with ancient Hawaiian religious and political society.

While it’s true the best beaches and waves were reserved for nobility, the art of wave “sliding” was practiced by ancient Hawaiians of all levels of social class.

It is also true that modern-day surfing can be traced to post-contact Hawaii, but surfing is an ancient practice, and the roots of this story are even older than human civilization on Hawaii. 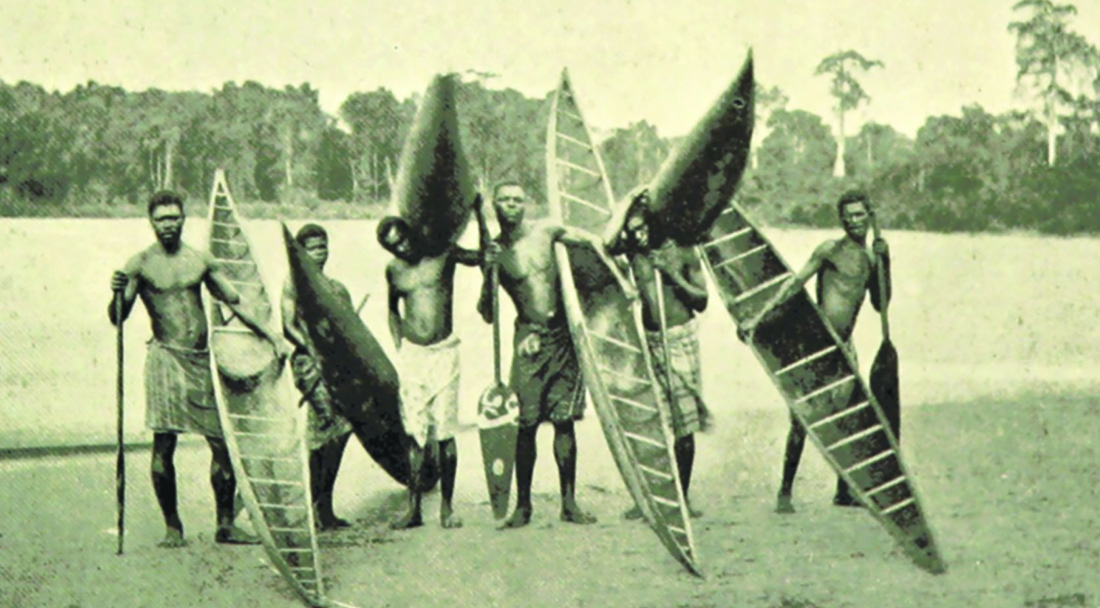 Photo c/o Surfing in Africa and the Diasporahttp://www.poolphl.com/pdfs/pool_surfing_in_africa_and_the_diaspora.pdf

The untold history of surfing

The untold history of surfing involves indigenus coastal peoples from all over the world independently developing wave-riding techniques, whether in canoes, boats, or on belly boards.

Surfing and sailing in Polynesia

As sea-faring peoples migrated across Polynesia, an area with more than 1,000 islands scattered over the central and southern Pacific Ocean, they shared the tradition of sailing and oceanic navigation.

Humans started spreading into these islands between 3,000 and 1,000 BCE. Researchers believe New Zealand and Hawaii were populated much later, during AD 1200 and AD 900 respectively. 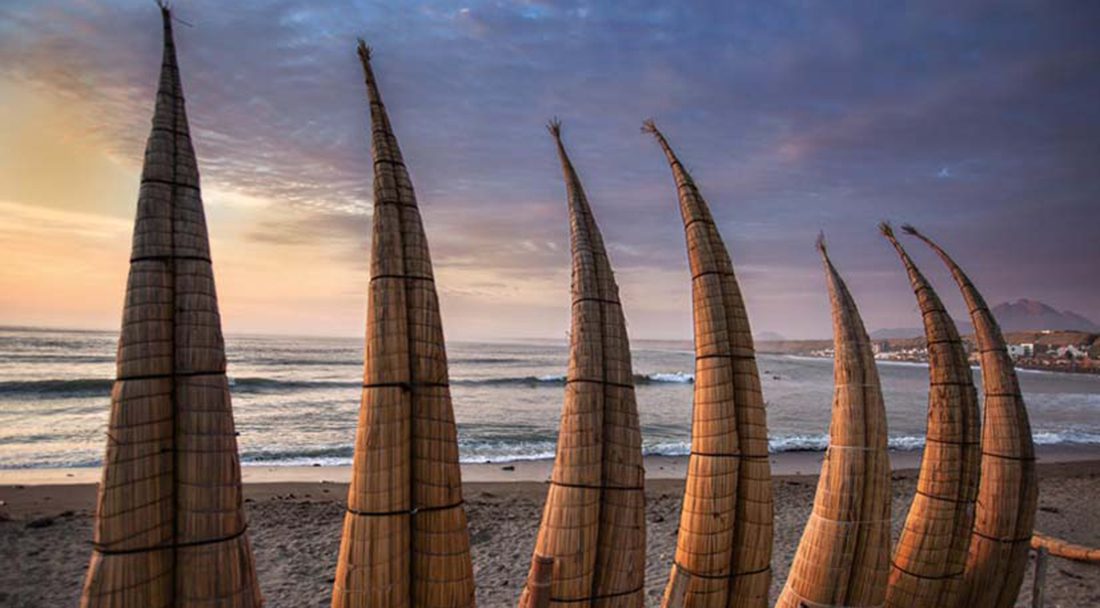 In Huanchaco, Peru, a beach located 560 kilometers north of the capital of Lima, lies a unique coastal town where you can still see fishermen using the legendary Caballitos de Totora (little Totora Horses).

These reed paddleboards, traditionally called “tūp” by the Mochica people, were invented to paddle in and out of the surf-zone to fish coastal waters.

The archaeological evidence for these crafts have been dated using pottery from 1100–1400 BCE which makes the Caballitos de Totora the first known surf vessels in the world.

However, Peru wasn’t the only region where surfing also sprung up independent from Polynesia. 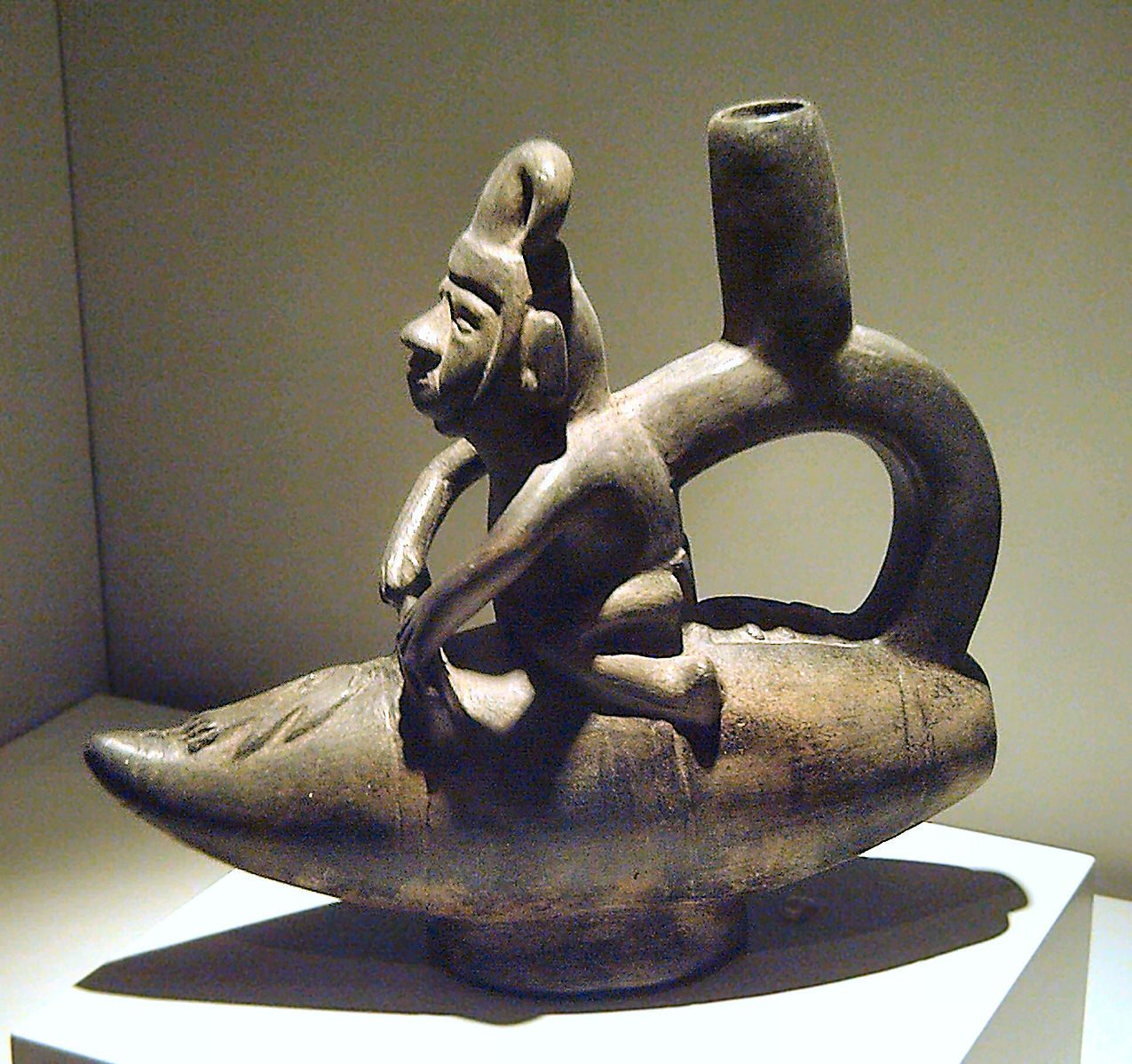 First written accounts of surfing come from Africa, not Polynesia

According to Kevin Dawson, (associate professor of history at the University of California, Merced), in his book “Surfing in Africa and the Diaspora,” surfing was not introduced to Africa in the 20th Century, as popular culture and movies such as “The Endless Summer” proclaim, but was rather a rebirth and remembering of 1,000 year-old customs and traditions.

Dawson states that the first known account of surfing was not written in Hawaii in 1778, but instead in 1640, over one hundred years prior in the country now known as Ghana.

Merchants and fishermen in this region independently developed surfing from as far north as Senegal down to Angola in Western Africa, a coastline running thousands of miles bordered by populations of seagoing peoples.

These West African cultures used surf-canoes capable of catching and riding waves up to ten feet high. They also used three to five foot wood surfboards in a variety of positions (including standing), as well as one-person surf canoes.

Dawson writes that contrary to the idea that Westerners introduced surfing to Ghana, Ga youth near Accra, Ghana were already riding traditional surfboards, which can still be found in some coastal zones today.

In addition to wave-riding crafts, Africans also rode longboards used for long distance paddling, up to 12 feet in length. Anthropologists have provided descriptions and photographs of individuals paddling on Lake Bosumtwi, one hundred miles inland from Cape Coast, Ghana, using them to traverse a five-mile wide lake.

Some of the first recorded accounts of surfing were a bit problematic, according to Dawson, since many European onlookers simply couldn’t understand what they were looking at, writing that parents “tie their children to boards and throw them into the water.”

By 1834, there was little doubt as to what was being witnessed in Accra, Ghana, with James Alexander writing, “From the beach, meanwhile, might be seen boys swimming into the sea, with light boards under their stomachs. They waited for a surf; and came rolling like a cloud on top of it.”

Then came even more accounts of African surf canoes in 1861 which described canoes as fast, agile, and maneuverable, allowing fishermen to easily travel amongst the surf zones and in and out of coastal waters.

One eyewitness noted that they (West Africans) “count the Seas (waves), and know when to paddle safely on or off,” timing the set waves and choosing to surf the last and largest wave of the set.

In fact, all goods exported and imported out of Africa for over 500 years, between the 1400s and 1950s (when modern ports were constructed), took place from the merchant ships to coastal towns by such skilled canoe surfsmen. 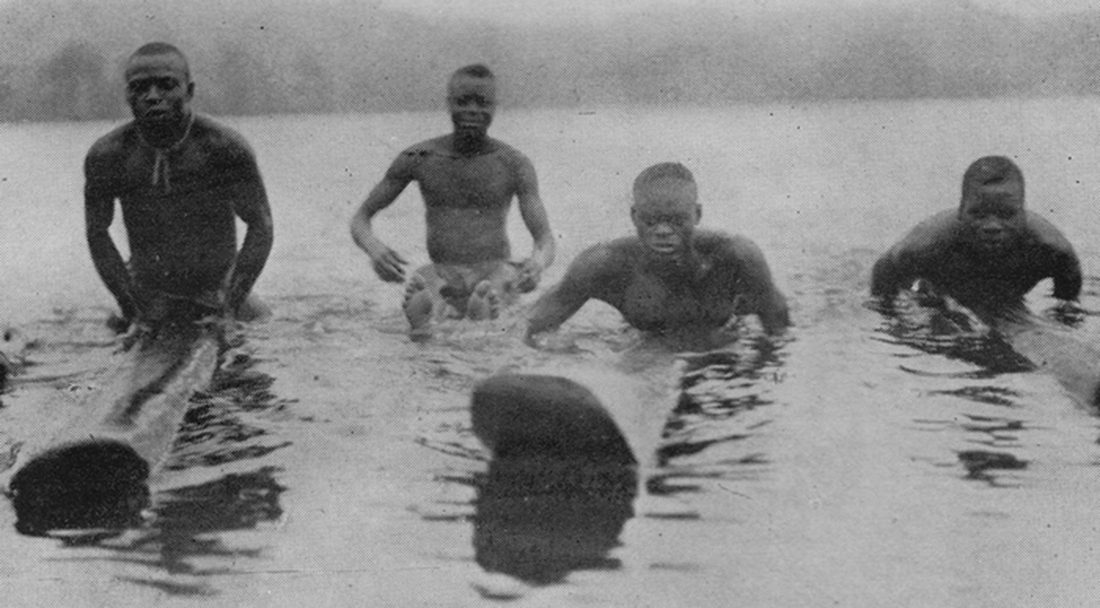 Similar to modern-day surfboard shapers who create different boards for different types of waves, there were hundreds of surf-canoe shapes developed in West Africa, each adapted to a different type of wave and use.

The different designs were created in order to capture the needs of local regions, such as the size, shape, steepness, and power of the waves.

There are also accounts of Africans bodysurfing from 1887, with another English observer noting a man playing in the waves by writing, “[he] is in his element, dancing up and down and doing fancy performances with the rollers. As if he had lived since his infancy as much in the water as on dry land.”

Similar to Polynesian peoples, surf-canoes in West Africa were sacred and carved from only certain trees in a ceremonial manner. It was often believed that these hallowed trees connected heaven and earth, and that the spirits which resided inside them continued to communicate with the water spirits throughout the canoe’s lifespan.

The ocean itself was considered a spiritual realm, its waters filled with deities and otherworldly gods, such as Mami Wata, or “Mother Water,” an ancient West African deity resembling a divine feminine mermaid.

Finally, according to Dawson, many historical accounts show that as early as the 1700’s enslaved Africans and their Afro-American, Caribbean, and South American descendants were surfing and surf-canoeing in the traditional way from the eastern United States down to Brazil. This pre-dates the spread of Hawaiian surf culture to the mainland United States. 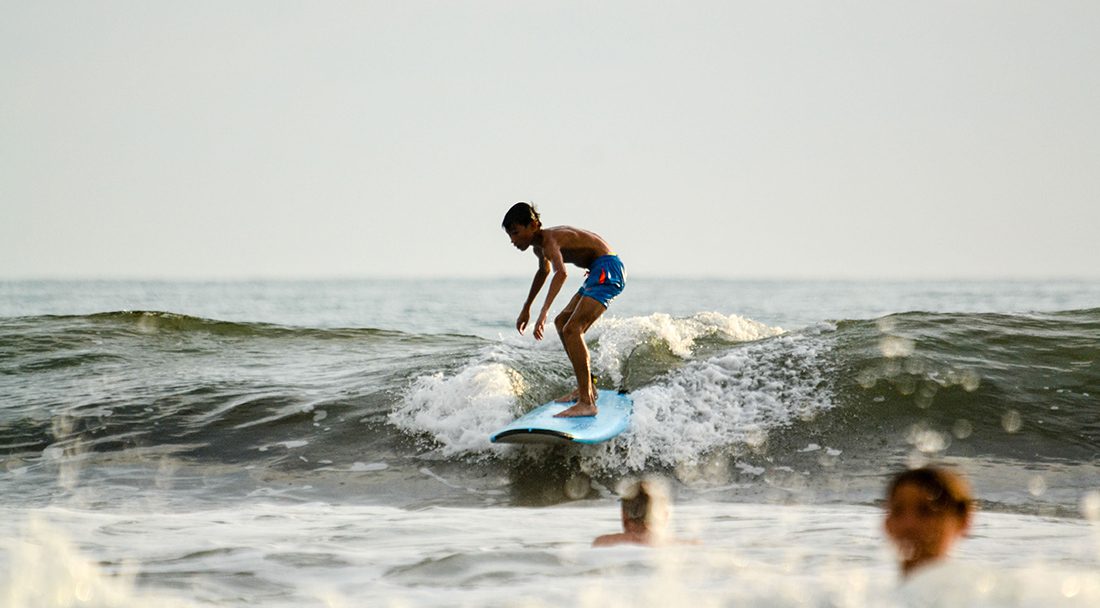 While modern-day surfing is hyper focused on sponsorships, consumerism, and fulfilling some kind of instagram lifestyle image, it remains a free activity, available to anyone with access to water and a little bit of courage.

Surfing is an activity that belongs to the people, and to the earth, and it uniquely connects the two in harmony with one another. By simply learning to bodysurf, you too can reconnect with this ancient tradition.

In fact, with a little know-how and some wood, you could even make your own surfboard.

Surfing has deep roots, which tell a story that stretches back as early as human beings themselves. This makes surfing (besides running) one of the most ancient pastimes in human history.

Where there is coastline, there are sea-going peoples tapping into the natural abundance of the ocean, and playing in the joyful rhythms of the tides and waves. Surfing is not only a sport for the royals, the elite, nor the fashionable and hip.

It is a practice of the people and remains to this day an opportunity to connect with the ocean as our ancient ancestors once did. 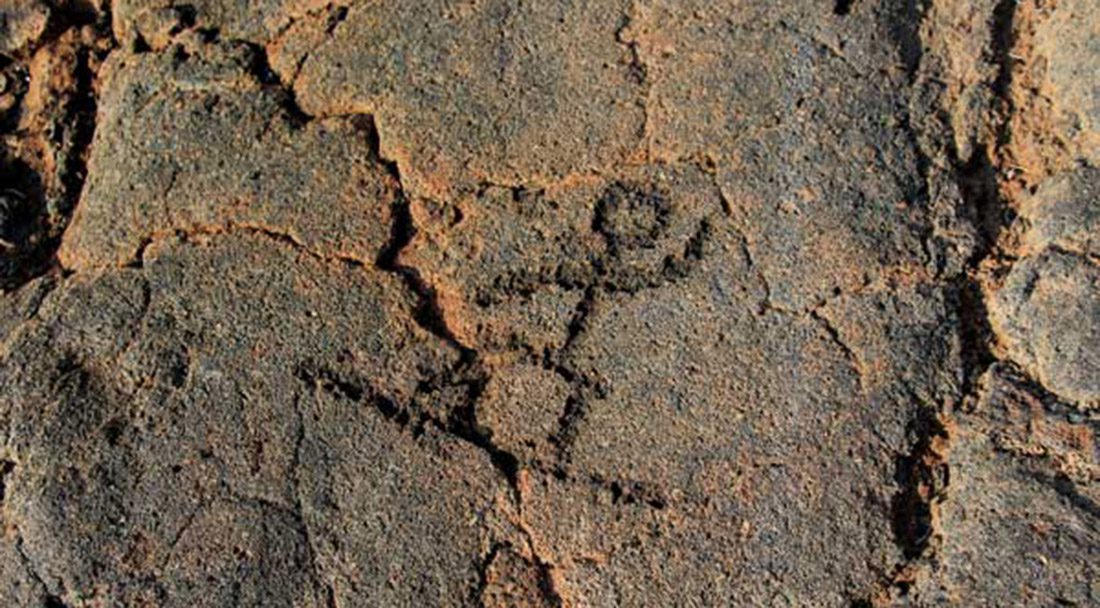 Timeline: A comprehensive history of surfing 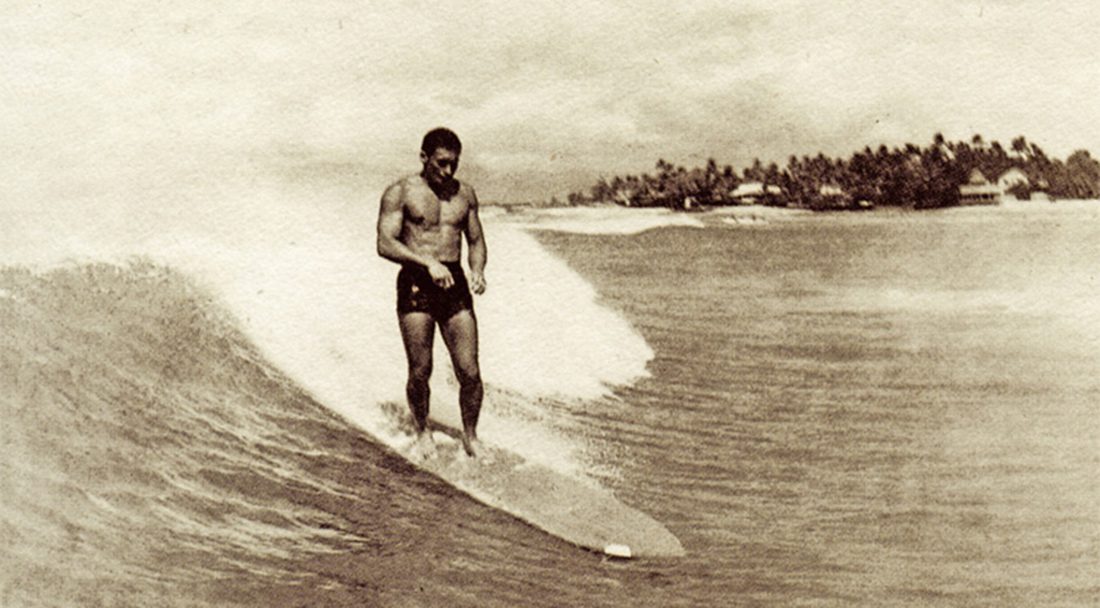 Want to learn more? Here are some of the resources utilized in writing of this article.

A brief history of surfing in Africa and the diaspora

Popular histories of surfing tell us that Polynesians were the only people to develop surfing, that the first account of surfing was written in Hawai‘i in 1778, and that Bruce Brown, Robert August, and Mike Hynson introduced surfing into West Africa. All these claims are incorrect.

AFROSURF offers a glimpse into the history, the culture and the lives of a group of people, whose context and experiences are over-looked or under-reported, taking pleasure in an activity that often serves to define their relationship with themselves, their community and the environment. Surfing. Sales of AFROSURF will raise money for African Surf Therapy projects Waves for Change and Surfers Not Street Children.

Ted Ed: “How did Polynesian Wayfinders navigate the Pacific Ocean?”

Imagine setting sail from Hawaii in a canoe. Your target is a small island thousands of kilometers away in the middle of the Pacific Ocean — a body of water that covers more than 160 million square kilometers. For thousands of years, Polynesian navigators managed voyages like this without the help of modern navigational aids. How did they do it? Alan Tamayose and Shantell De Silva explain.

Black Surfers Reclaim Their Place On The Waves

In taking their place in the waves, people of African descent are reclaiming lost traditions. …the centuries-old African practices of wave-riding — whether on boards or in canoes — evolved independently, historians say, in multiple spots along the West African coast.

Bruce’s Beach was stolen a century ago. It’s finally been returned.

The historically Black beach in California is now only the second in the country owned by African Americans.

Surfing’s history – from Africa to Polynesia to the Americas – is one that’s rich, diverse, and incredibly nuanced. So much so, that we are only beginning to scratch the surface and understand it.

Readworks: “The History of Surfing in Hawaii”

Today, surfing is a multi-billion-dollar global industry, with tens of millions of enthusiasts worldwide. For some it’s a serious sport; for others, just a way to let loose. But despite its casual association with fun and sun, surfing has a richer and deeper history than many realize. Scott Laderman shares the hidden history of surfing.

Examining the history of “black consciousness” as it triumphs and evolves into the minds of black surfers, we learn the power of transcending race as a constructive phenomenon. 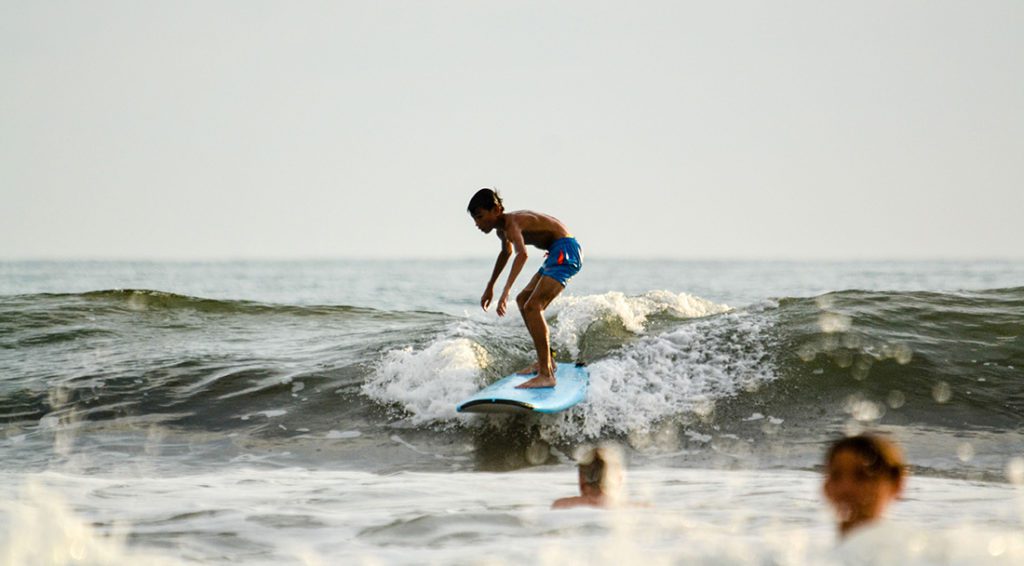 The Untold History of Surfing